What's with the Bee logo? 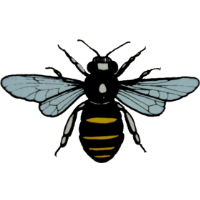 The Frodsham Bee is the official emblem for Frodsham and has been adopted as a logo by Frodsham Town Council.

The Frodsham Bee is in memory of...

The Rev William Charles cotton was an Anglican priest, a missionary and an apiarist (Beekeeper). He had a passionate interest in bees from Childhood. At Oxford University he was a founder and the first secretary of the Oxford Apiarian Society. In 1837 he published his first work about bees, A Short and Simple Letter to Cottagers from a Bee Preserver, which sold 24,000 copies. A second Letter followed three years later. In 1842 he published My Bee Book which amongst other advice suggested ways to render bees semiconscious to obtain the honey rather than by killing them.

After education at Eton College and Christ Church, Oxford he was ordained and travelled to New Zealand as chaplain to George Augustus Selwyn, its first bishop. He introduced the skills of beekeeping to North Island and wrote books on the subject. There is a tradition that Cotton introduced bees to New Zealand but this is incorrect, although he was largely responsible for teaching the skills of beekeeping to the immigrants and the natives. He spent much time in training settlers and Māori in the practices of keeping bees and gathering their honey. Towards the end of 1844 he published A Few Simple Rules for New Zealand Beekeepers. He later wrote a series of articles on beekeeping in The New Zealander and these were published together in 1848 as A Manual for New Zealand Beekeepers.

In the summer of 1857 Cotton was appointed vicar of Frodsham. At the time there were problems in the parish, in particular there was little financial provision for the outlying townships and the fabric of the parish church of St Laurence was in a bad condition. To make matters worse, the church stood in an elevated position above the town, making access difficult. Cotton sank into a state of apathy and despondence, and in the autumn of 1865 he was admitted for several weeks to Manor House Asylum, Chiswick, an asylum. There was some improvement in his mental condition and by 1870 Cotton was making arrangements for the restoration of the parish church. Cotton organised the building of a temporary chapel of ease in the middle of the town. This was constructed of iron (and known as the Iron Church) and was erected in a very short time on land donated by the Marquess of Cholmondeley. In addition to restoring the parish church, Cotton began to organise the restoration of the vicarage, in autumn 1872 hiring John Douglas to draw up plans. He also employed Douglas to design a house for him to live in while the vicarage was being renovated.] Cotton successfully improved the provision of church schools in his parish.

In the late 1870s Cotton's mental health began to deteriorate to such a degree that he became unable to carry out his duties. In 1879 a sequestration order was obtained to allow John Ashton to take charge of the affairs of the parish; Cotton was readmitted to Manor House in the early summer and died there in June. His funeral took place at St John the Baptist's Church in Leytonstone and he was buried in the family grave in the churchyard. On the same day a memorial service was held for him in his Frodsham church. A memorial to his memory is in Frodsham Parish Church. The symbol of the honey bee appears on the chain of office of Frodsham's mayor and in various other places in the town, a Frodsham street is named Maori Drive and a Māori inscription is still present on the doorstep of Cotton's Old Vicarage.

There is no doubt that William Cotton was a talented man whose achievements were limited by his mental ill-health. He did achieve much, particularly during his years as a missionary, and in the field of apiculture. His achievements in Frodsham, included the building of the Iron Church, the restoration of the parish church and vicarage, and the development of the church schools in his parish.